VR inherently promises real life like experiences hence the word reality, but that’s a lie because it continues to fail to keep that promise.

Today VR has headsets that lets people see a virtual reality everywhere they look and controllers or gloves to interact with virtual reality, but how you move is still left to reality. You can only move in these experiences using the same controller you use to interact with things (often at the same time which is confusing) or use your legs in a predetermined space (if you have the space) and run out of room. Today, people only have their eyes and hands in VR, and people are just dealing with the fact that their legs aren't.
‍
You are not moving in virtual reality, your movements in the physical world are being translated into virtual reality.

You have no control over your movement in virtual reality. Treadmills, slide mills, and trackers fail at capturing how you move. The problem is your movements are being translated poorly and UR has the solution.

What We Do
Unlocked Reality is a virtual reality hardware accessories company. We focus on building solutions for what virtual reality headsets lack - to deliver on the full promise of what virtual reality is supposed to be, a reality that is virtual. We are currently focusing on making a pristine product that should be the standard for what locomotion should be in VR, natural and unrestrictive. But we don't plan on stopping there. Our vision is to create a family of products and a brand that is the standard for immersive virtual reality experiences, achieved by pursuing our mission of making virtual reality feel as real as reality. That is, after we complete our first product, we plan on making accessories for the rest of the body. We are different from other VR companies and solutions because we are building our products to actually solve the problems of VR; using electronics, circuitry, and user experience based engineering to create extensions of natural movement that users can forget about and instead stay immersed in their VR experience.
We Have The Key
Immersion is more than transporting one’s mind into an alternate reality, immersion is connecting your body’s senses and constructing a reality around that alternate reality. In VR, immersion is defined by a deep mental involvement with another world. In order to be deeply involved in another world, one must be able to freely explore that world; there must be a method to track someone's position in any virtual space. We are building a platform that revolutionizes locomotion in a virtual environment. Say goodbye to rigs, harnesses, and clunky devices as our patented design provides freedom in movement. Our platform’s emphasis on natural movement enables users to mimic real life walking and running without having to feel heavy or slip. We provide a solution to VR retention rate by targeting the user’s difficulty with being and staying immersed.

UR-Base
We are building a platform that allows virtual reality users to move naturally and untethered in any direction. We use a Patent Pending method of dynamically reducing friction, at specific times while a person is walking, so they stay in one place. This works through an implementation of magnetic levitation (maglev technology) and the best of modern day machine learning. Our product will provide a seamless walking, running, and overall moving experience that will only get better with use as our machine learning system tailors the experience to the user. We designed this with user experience in mind so that minimal interruption or interaction with the product is ever needed. No harnesses to restrict movement, no railings to bump into, no learning to walk on slippery surfaces, no dealing with jerky high latency motorized treads, and definitely no impediment that a user has to encounter
Software
Our product would not be possible without software. With machine learning, we can train a model to recognize a user’s gait pattern. In addition, sensors are used to track a user’s movement relative to the platform. Combining gait and sensor information, we can train a model to accurately predict a user’s movement. This information is vital, as we can combine this data with the hardware to enable a user to walk in place. It is important to note that our machine learning is active; given enough time, the machine learning algorithm will improve further by adjusting to the user’s unique gait pattern.

AR/VR Can't Succeed Without Addressing UX
The demand for virtual reality hardware is rapidly growing, but there’s a fundamental issue with the hardware available in today’s market - consumers are dissatisfied with the user experience.
‍
With overall poor user experience, most users believe that a wider variety of games, less lag, and better graphics can improve VR as a whole. Although they are not necessarily incorrect about this approach, we can better improve UX by targeting locomotion. Locomotion is the movement or ability to move from one place to another and it is a prime attribute of the user experience in virtual reality. Restricted and non-intuitive locomotion makes for an unsatisfactory user experience that consumers complain about with today’s VR technology available on the market. When locomotion is compromised, a user will find it difficult to be and stay immersed - leading to frustration when adopting VR and lowering retention rate.
AR/VR MASS ADOPTION OBSTACLE
2020 Consumer Report - Perkins Coie LLP 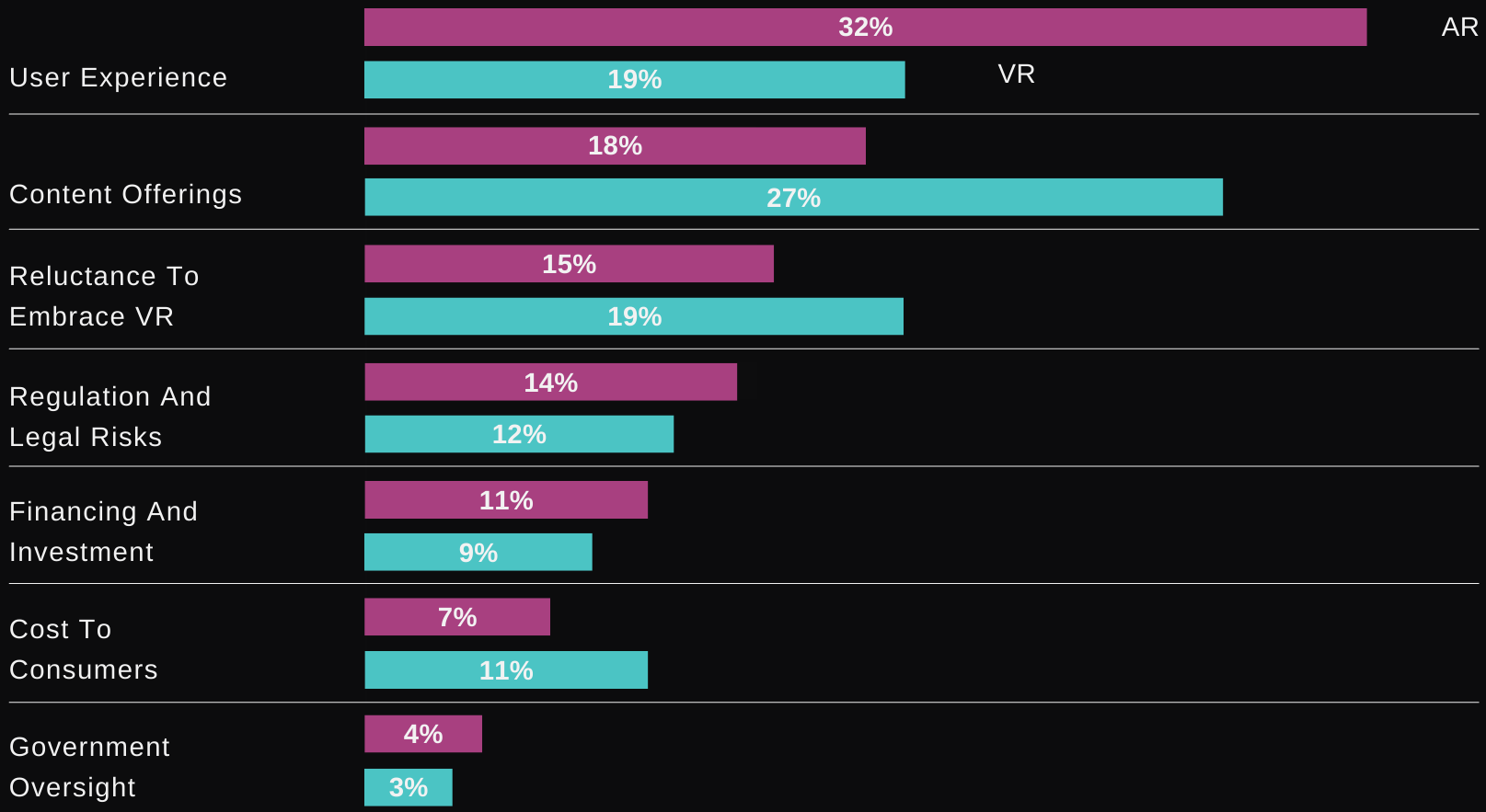 Immersion Is The Gateway
Harnesses, wired accessories, and slippery surfaces are just a few of the many components that hold consumers back from enjoying an engaging experience. Most consumers currently experience VR as game goggles - still experiencing physical limitations of the outer world providing lackluster results through awkward controls. Immersion plays a crucial role in the user experience, and in the case of AR/VR, it determines user retention. To achieve immersion we must minimize the obstruction between the outer world and virtual reality.
‍
We build our platform to address two often neglected components of the human sensory system. First the vestibular sense, the leading contributor to the sense of balance and spatial orientation for the purpose of coordinating movement with balance. Secondly the proprioceptive sense, responsible for sense of self-movement and body position. Together these two senses form our body’s ability to be physically engaged and VR technology available on the market obstructs our vestibular and proprioceptive senses. We want the body to follow where the mind goes - we want immersion.
The Sensory System 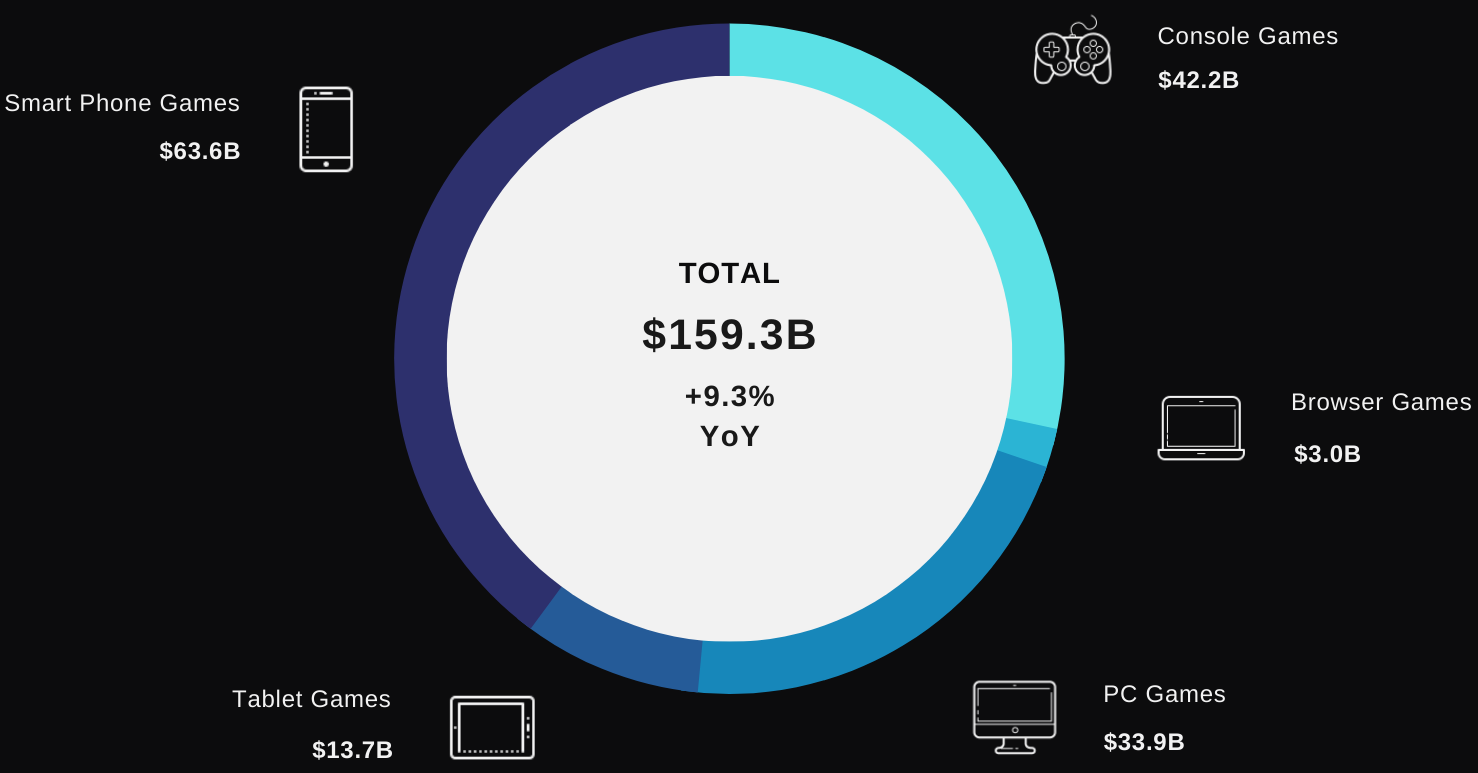 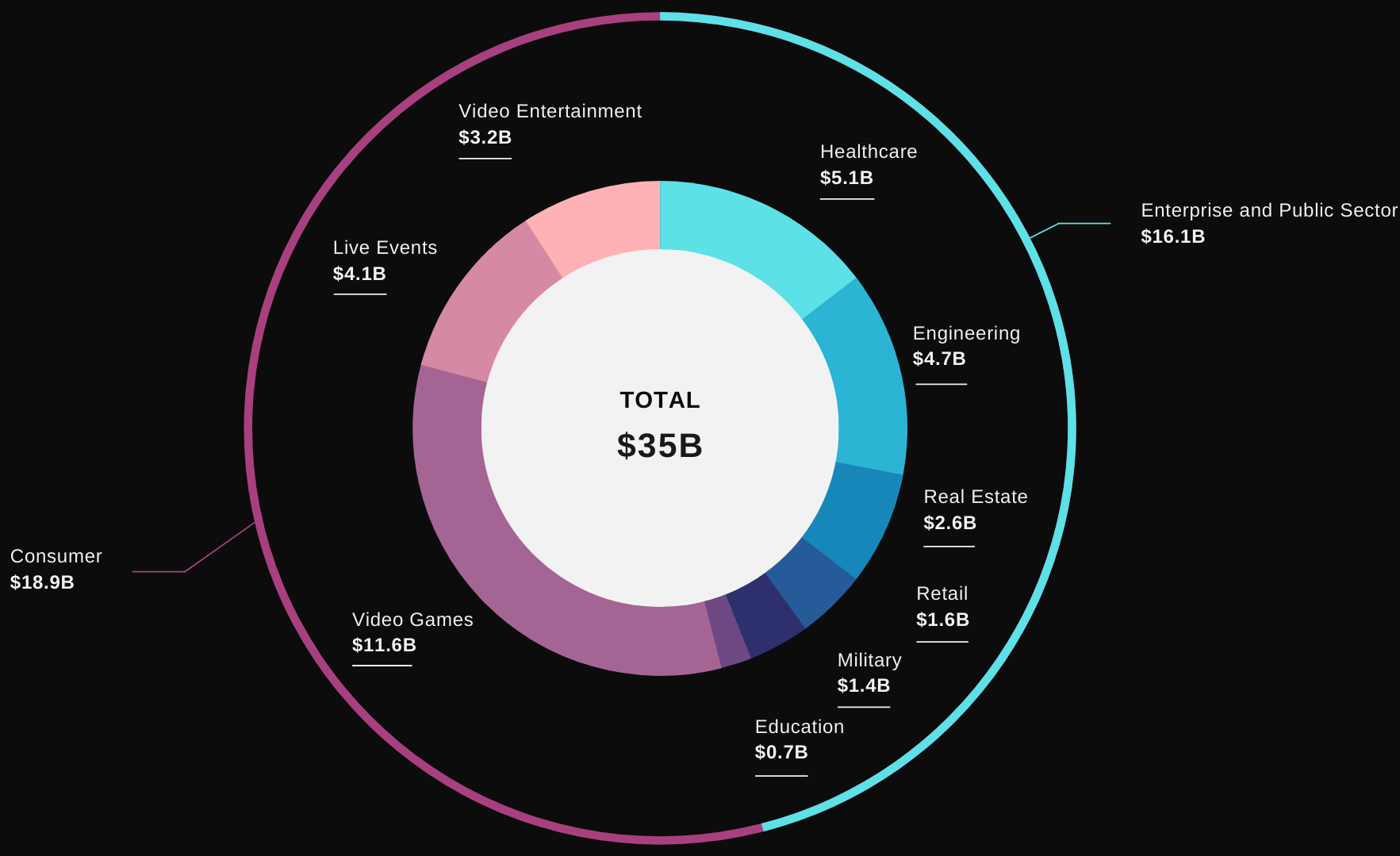 The platform we are building is not limited to VR gaming and entertainment. In fact by providing a more immersive and positive user experience we empower all applications of VR locomotion ranging from personal use to professional practices. 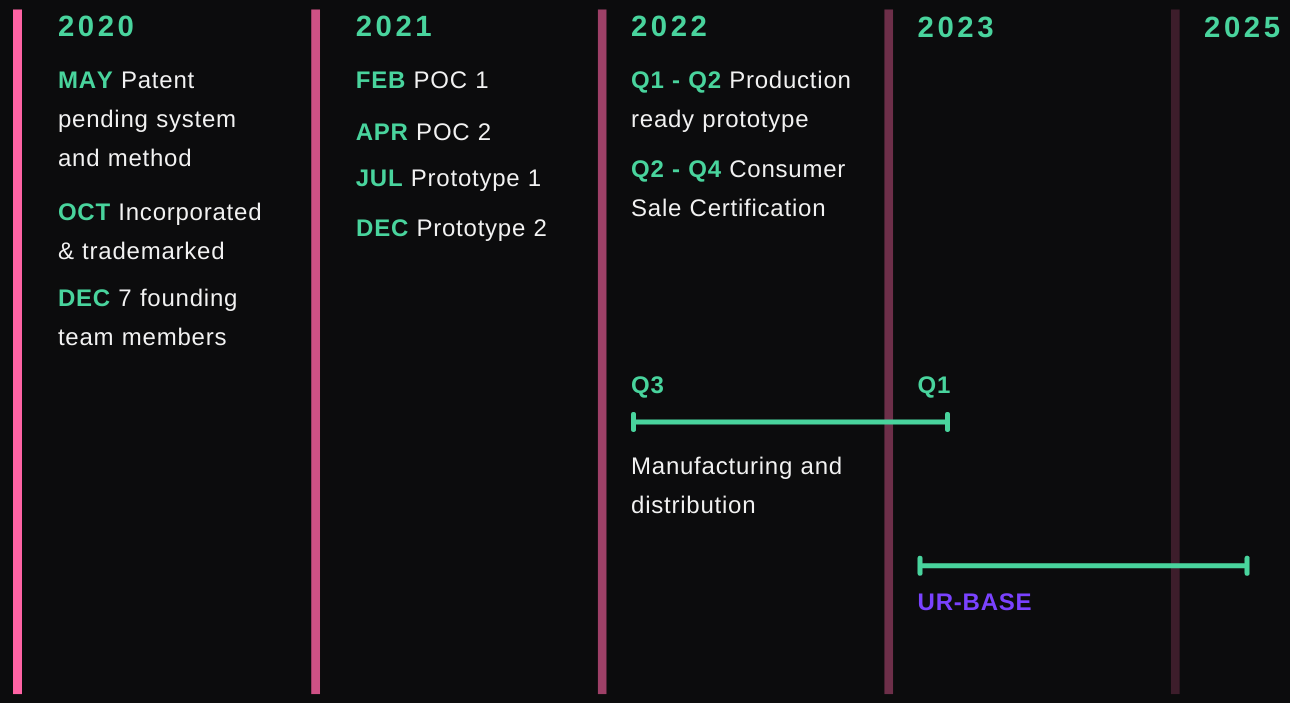 Here at Unlocked Reality, we believe that we have the best solution to numerous VR problems, such as VR locomotion. VR is currently at a lackluster state, and on our way to improve VR, we have a timeline of goals and milestones we would like to reach along our mission.
‍
Thus far, the idea of starting a company around VR started early 2020. From there, we were officially recognized as a company and trademarked during October 2020. Some funding has allowed us to hire 7 more additional team members during December 2020. With additional help from our team members, we were able to set a goal of completing our first product: UR-Base, for which we have completed 2 proof of concepts (POC). The first proof-of-concept, a benchtop proof of concept to demonstrate active friction reduction was completed February 2021. The second proof of concept was built to show how the first proof of concept could scale and lift heavier objects, this proof of concept was completed during April of 2021. Now we are on track to complete a functional prototype (Prototype 1) of UR-Base, which will be larger than the second proof of concept, by around July 2021. After Prototype 1, we are planning to complete a version 2 of the prototype (Prototype 2) around December 2021 which will build out and enhance the feature set of Prototype 1. Our production prototype will be set to be completed approximately Q1 to Q3 of 2022.
‍
In terms of UR-Base, our three main milestones are to create a production ready prototype between Q1 and Q2 of 2022, to get certification for our product between Q2 to Q4 of 2022, and to have manufacturers help distribute our finalized product between Q3 2022 to Q1 2023.
‍
We don't just plan on stopping at UR-Base. In addition to UR-Base, one of our goals is to create a family line of products. On top of having UR-Base being released around 2023, we hope to release our 2nd product around 2027 and our 3rd product during 2030. As to what those products will be and what they solve, that is yet to be unveiled.

Unlocking Spatial Computing For The World
Our research and solution for locomotion serves as the basis for the advancement of spatial computing. Spatial computing exists in the heart of VR, AR, and XR; it refers to physical space that is represented in a digitally augmented space. Being able to successfully transport and interact with any constructed world has the potential to solve numerous existing problems. Environments can be created to help treat patients with PTSD. Architects can explore virtual prototypes of their designs. Remote education can feel more personal and connected. What’s missing from an immersive and virtually constructed environment is seamless locomotion. Even if a scene is accurately constructed for our eyes, ears, nose, mouth and hands, restriction of our natural movements is a limitation to our free will. By creating authentic locomotion, we can take immersion to the next level and build a better user experience.
Close

Message delivered!
We look forward to contacting you soon.
Message failed to deliver.